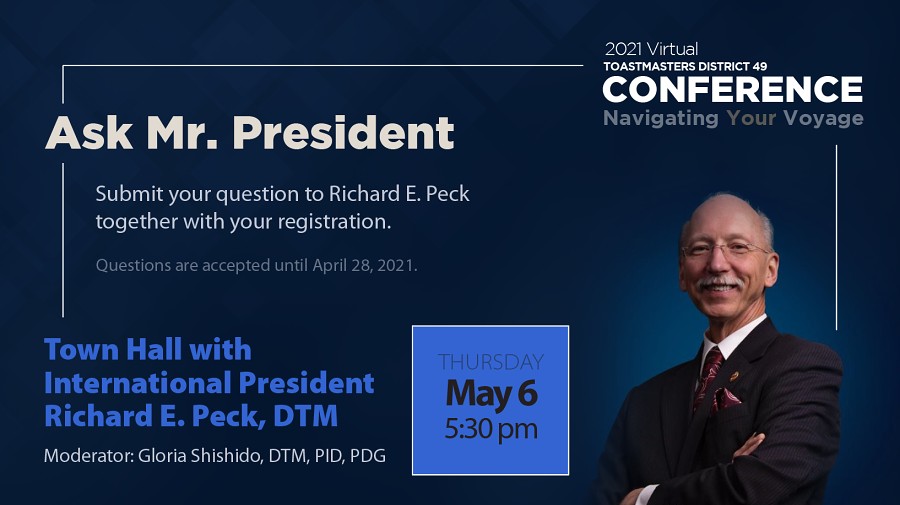 This event is a part of the 2021 District 49 Conference: district49.org/conference/

District 49 is honored to host Toastmasters International President, Richard E. Peck, DTM and he will be answering questions at a special townhall meeting moderated by Gloria Shishido, PID, DTM.  The session will be 45 minutes where the President is presented with questions solicited by members via the registration of the event. Additional questions will not be accepted during the townhall meeting to provide an undisruptive session.

Please join us for an informational meeting.  Zoom link will be sent to registrants.

For over 30 years, Richard was a senior member of the network support division at AT&T. The Seymour, Connecticut resident led cross-functional teams to successfully deliver million-dollar high-tech projects.

Outside of Toastmasters, Richard has served as a club president and lieutenant governor for Kiwanis International, is a member of Lions Club, and has also worked in various capacities with the Catholic War Veterans. He is also a commissioner on a local government board. Richard is also a professionally licensed race car driver and in his limited spare time can be found at the racetrack as either a driver or spectator.

Gloria Shishido is a Distinguished Toastmaster, Past International Director, 2014-2016, Past  District Governor, 2006-2007 and District 49 Pathways Guide, 2019.  She holds a master’s degree in healthcare administration from Central Michigan University in Mount Pleasant, Michigan. Gloria’s Bachelor of Science degree was in Medical Technology.  She retired from The Queen’s Medical Center after 38 years in clinical laboratory and human resource management.   Gloria also retired from the Hawaii State Center for Nursing as a project coordinator.

A Toastmaster for over twenty years, Gloria is a member of Aloha, Windward Winners, Liliuokalani Toastmasters Clubs and advance clubs, Na Hoku Kai Toastmasters, Pathways Central and Hawaii Comedy Central which she was the club sponsor this year and current Club President.

As the District Governor, she led her leadership team to a Distinguished District status.    As a former Toastmasters International Board of Directors member, Gloria was a “working ambassador” for the organization to develop and support policies and procedures to guide Toastmasters International.  Gloria has a passion for life long learning and making a difference in the lives of the people she comes into contact.

Registration is closed for this event.