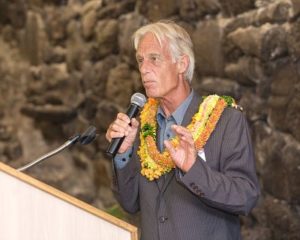 For 20 Years, Jeff Beard has volunteered to sponsor Toastmasters clubs in Oahu prisons at Halawa and Waiawa, going every week to support the inmates as they run their own public speaking clubs.

For 20 years, Beard has volunteered to sponsor Toastmasters clubs in Oahu prisons at Halawa and Waiawa, going every week to support the inmates as they run their own public speaking clubs.

"It really is an honor to listen to these speeches." he said.

On a warm night at Waiawa Correctional Facility last week, the speeches by the inmates unintentionally followed a theme of inspiration.

"Even if you don't put your best foot forward, put any foot forward. Just move in the right direction." Jeremyal Leedy said in his speech. Leedy serves as president of the Hooponopono Paahao Toastmasters Club at Waiawa, a group the inmates sometimes call "the gentlemen's club."

This started when Beard, a member of the Pearl City Toastmasters, called the Department of Public Safety to see if he could start a club in their Ala Moana office building. Toastmasters is an educational nonprofit that helps members develop public speaking, communication and leadership skills. Its members are usually business people and professionals. Beard's call was routed to the director of education, who listened to his pitch and said, "I want this for the prisoners."

That was in 1998. Since then. Beard has been faithfully supporting the clubs. Three years ago, fellow Toastmasters member Keith Webster volunteered to help so Beard could take some nights off. If one of them isn't present at the facility to sponsor a meeting, the meeting can't be held.

At one of his first meetings, he heard a speech from a Halawa inmate who said the first time he had tried Toastmasters. He was so nervous he just stood there swearing until he was kicked out. "He came back."
Webster said. "He gave a speech about how he was raised and where he came from." Webster gives that example to show the usefulness of the program. "I thought, this is important that these men can get up and tell their story."

Each meeting runs according to a structure established by Toastmasters International. . There are four speakers who know ahead of time that they're scheduled to speak and how long their speech is supposed to be. There's a grammarian who catches glitches during the presentation and an "ah counter" who makes notes of every extraneous utterance.

"You had one 'ah' and one 'um’," the evening's ahi-counter, Isaac Villegas, reported to his fellow member. Part of the meeting is set aside for feedback. Beard said that giving criticism is as hard as receiving it graciously, so club members get a lot of practice doing both. "You excelled in eye contact, even with new people in the room. You may want to use bullet point topics to help yourself out," Jeremiah Lopez told another club member.

Sean Musko used feedback from his first speech to hone his presentation and try again. "My first time, I tried to memorize the whole thing, and I ended up skipping half my speech," he said. This time, he worked from notes, stepping away from the podium to tell a story about squandering a job opportunity and using his time in prison to make himself into a stronger person. It 'was a polished, engaging speech.

"I always doubted myself. I doubted my education," he said. "Speaking at Toastmasters is an effort to get back confidence in myself."

Iokepa Leialoha, vice president of the club, said he's been a member the longest, and he's watched members come and go. Toastmasters tends to be that way, even at clubs out in the community. People come with a specific goal in mind - to become better speakers and leaders - and they leave when they’ve reached their goal or if they feel it's too overwhelming.

"Sometimes it's 20 guys at a meeting. Sometimes it's seven," Leialoha said. "I really like watching people 'ow over time. Some speeches have brought me to tears."

"The amazing thing is to watch week after week, people get better," Webster said. "It's just a matter of practice. That's the thing about public speaking. At first, it's just getting past the nerves and remembering to breathe. Later, you can work on techniques."

Waiawa is a minimum-security facility that houses 334 male felons. All are required to participate in educational programs and work-lines as they work toward their release. Participation in Toastmasters is voluntary.

Webster is hoping to recruit other Toastmasters members to volunteer for these meetings or help start others on the outside for when these inmates are released.

"There are lots of ways to fall down. There have to be ways to lift people up:' Webster said.

As he brought his 10-minute speech to a close, club president Leedy held out his hands to the audience in a gesture politicians practice to get just right.
"It is what you make of it, gentlemen," he said. "You have your stars. You have to align them."

Reach Lee Cataluna at 529-4315 or lcataluna@staradvertiser.com. 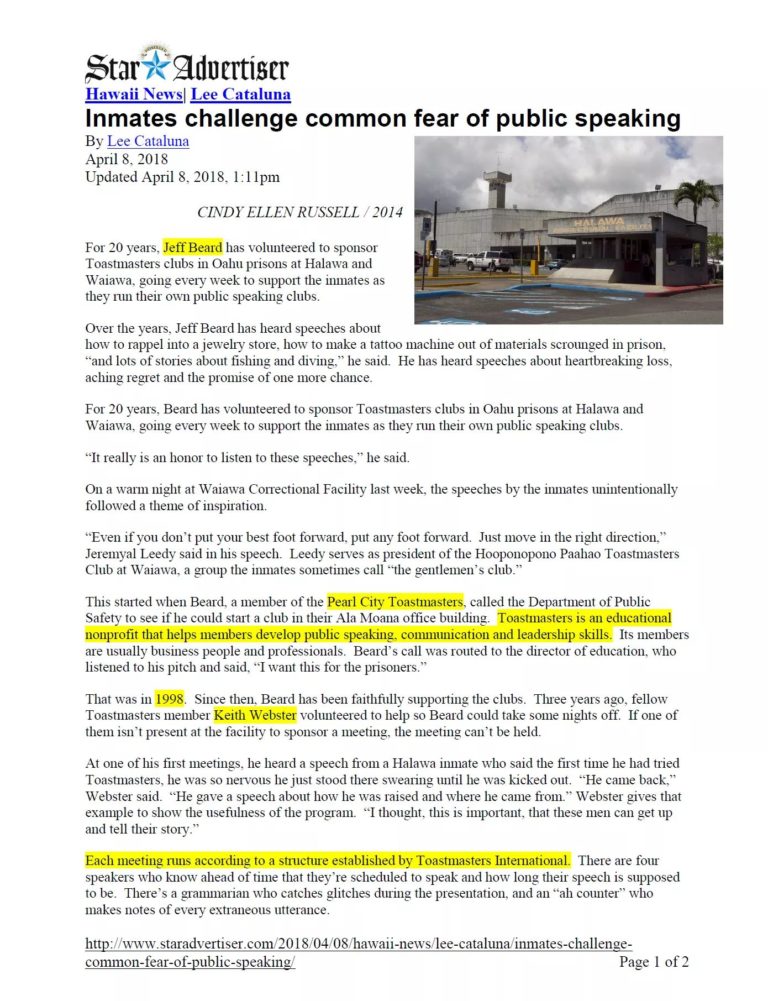 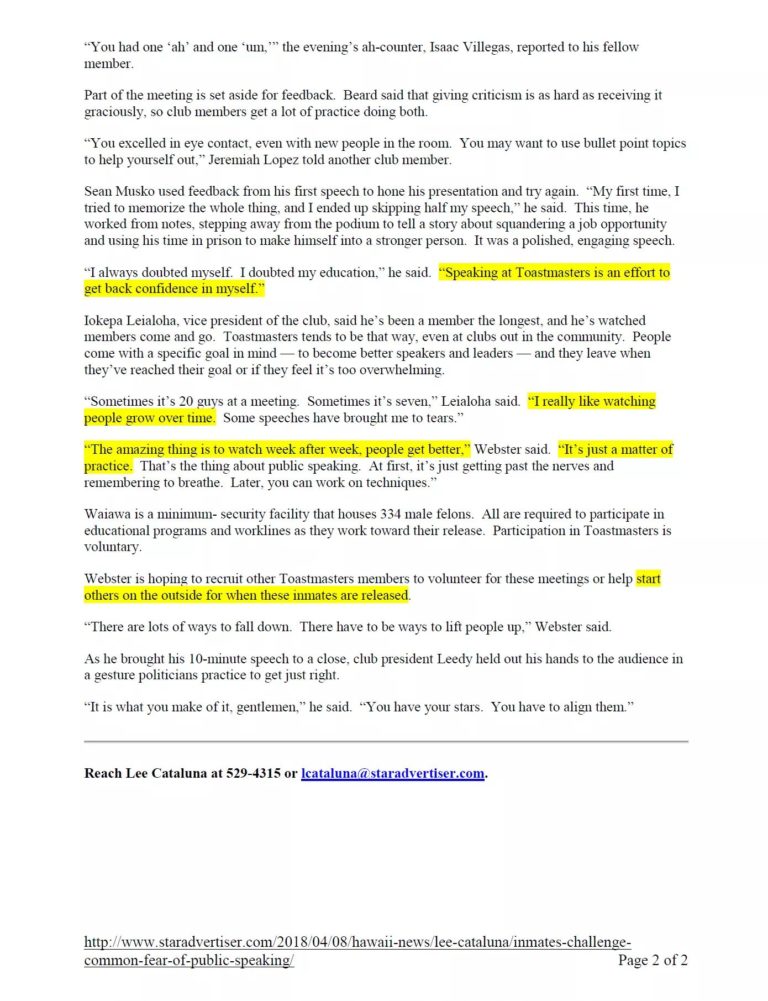