The idea to form a club for the District started out at the District Training when Gloria Shishido mentioned that she would be seeking a Club Sponsor opportunity to meet the Distinguished Toastmasters requirement.  Dialogue spun and the idea popped up, why not charter a club focused on HUMOR!

Taking up the challenge, laughter increased in November 2020, when Joy Frelinger and Gloria pitched, in a public announcement, a new club in District 49 based on humor and comedy at the Laulima Humorous Speech Contest.

The perspective club began with an organizational meeting on Friday, November  27, 2020. In attendance were a large number of interested members including Toastmasters from California and Nevada. Everyone agreed the new club should be named Hawaii Comedy Central and it would be an advanced club, formed with dual members interested in expanding their humorous stories, as well as learning “improvisation and characterization” techniques, as demonstrated by Victoria Ferrer, Improvisational and Characterization Coach, the keynote speaker.  Attendees couldn’t stop laughing as Vicky led everyone through activities which exposed  participant’s amazing hidden talents!

Toastmasters International advertised a 2020-2021 New Club Incentive where the charter fee of $125 and the new member fees of $20 per member would  be waived. The New Club needed to pay for current membership period dues plus the next six months. With this incentive, Rose Kirland began Facebook notifications publicizing the formation of Hawaii Comedy Central Toastmasters Club. The Club meets online, each second and fourth Friday from 5:30-6:30 pm.

On December 14, 2020, the application to organize along with the $125 fee was  sent to provide an access to the Free Toast Host. The club held elections and the following members were selected to fill the club officer positions:

Notification arrived on February 1, 2021 that Hawaii Comedy Central Toastmasters Club is chartered. YEAH!!! Now for the fun and laughter. District 49 rocks!  Come visit us some time! 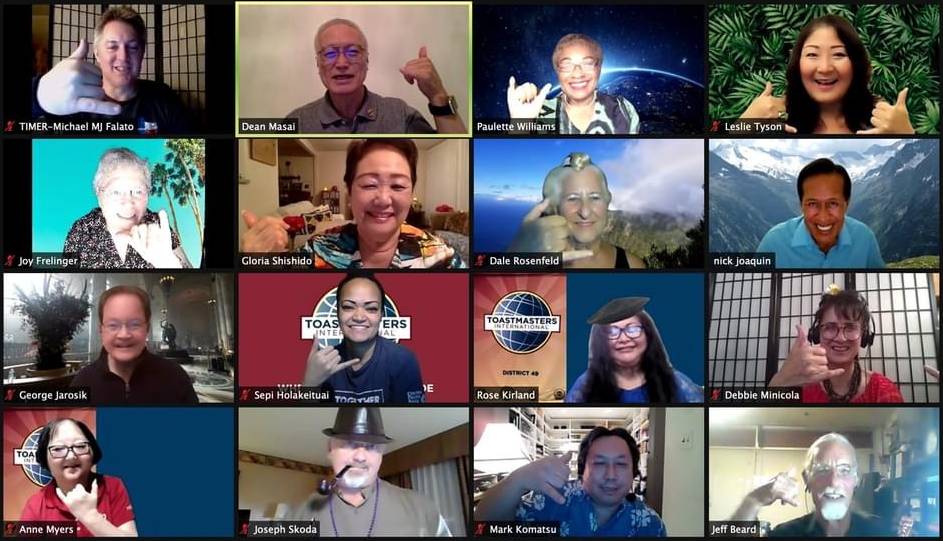